Hello everyone and welcome to another edition of The Expert Belt! With the Lost Thunder set just released, the meta-game is now changing once again. But among all the hyped cards in the set, there is one particular card that is quite left under the radar. This card might potentially win you some match-ups easier than before and might even swing the momentum towards your favor.

This edition of The Expert Belt’s featured card is the Mold Pokémon itself, Shuckle GX! 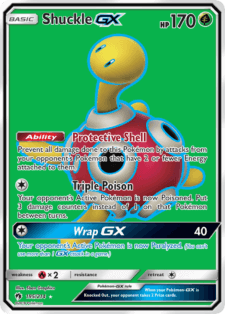 Shuckle GX is a 170 HP [G]rass Type Basic Pokémon. It has an Ability and 2 attacks.

Ability: Protective Shell
Prevent all damage Advanto this Pokémon by attacks from your opponent’s Pokémon that have 2 or fewer Energy attached to them.

[C] Triple Poison: Your opponent’s Active Pokémon is now Poisoned. Put 3 damage counters instead of 1 on that Pokémon between turns.

[C] Wrap GX: 40. Your opponent’s Active Pokémon is now Paralyzed. (You can’t use more than 1 GX attack in a game.)

Shuckle GX is weak to Fi[R]e, has no Resistance and 1 Retreat Cost.

Shuckle GX is a fairly straight-forward Pokémon that aims to whittle and slow down your opponent’s board progression. Decks without an energy engine (that relies mainly on just manual attachments) are bound to be feel the wrath of the Shuckle GX. Shuckle GX can be a deck on its own or tech-ed in to help aid the early game of a setup deck (although the latter is much more less gimmicky).

The best thing going for Shuckle GX is its versatility to fit in any deck due to its cheap 1 Colorless Energy cost to attack.

Its Ability “Protective Shell” makes Shuckle GX an ultimate nuisance towards non-energy engine based decks like Zoroark GX or Buzzwole GX from putting early pressure. This can slow down those decks while you can setup your own board to wipe out your opponent later. Most decks utilizing mainly Double Colorless Energy are bound to have some problem when Shuckle GX is in the Active Position. 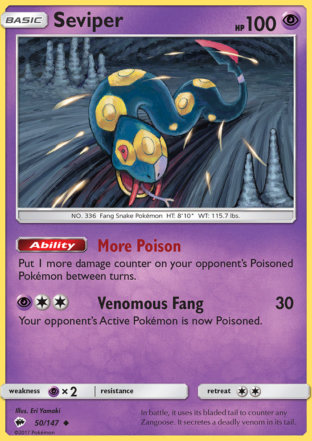 Triple Poison is Shuckle GX’s bread and butter attack, aiming to literally whittle down your opponent via a Poison attack, dealing 3 damage counters instead of 1 each turn. Maybe if you have a Seviper (BUS 50) on your Bench, then you deal a total of 4 more damage counters of Poison between turns. Talk about annoying!

Wrap GX is basically used as a last resort attack if you have no viable GX attack left. It is, however, a good attack when your opponent’s Pokémon is already Poisoned beforehand.

As for the disadvantages of Shuckle GX is that its ability is easily countered if your opponent is running an energy engine deck like Vikavolt or Malamar, where getting 3 Energy cards on a Pokémon to attack is easy peasy. Its main attack has no damage, just the effect of Poison, thus no way of altering the damage significantly (if only Triple Poison does a base 10 Damage it would have been so good as Choice Band and Professor Kukui can help amplify the damage).

Plus. cards that have in-built switching like Dawn Wings Necrozma GX can get around your attack effect easily and hampering your strategy.

Seviper (BUS 50)
Need more damage with Poison? Then, Seviper is the snake for you! Its Ability “More Poison” literally, gives more poison… damage for your Shuckle GX. 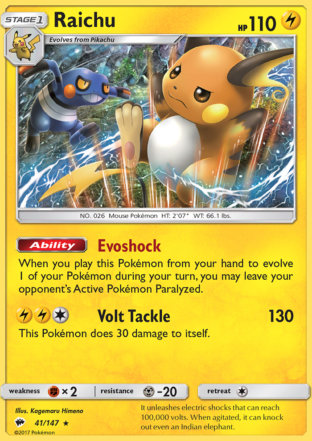 Raichu (BUS 41)
If you’re taking the long meme route (which is a pure Shuckle GX deck), then Raichu is probably your go-to support Pokémon to keep your opponent’s Active Pokémon from doing anything! Utilize with Po Town and Acerola and maybe you can trap your opponent’s Active Pokémon for good. Just maybe. (If only Devolution Spray was still legal). 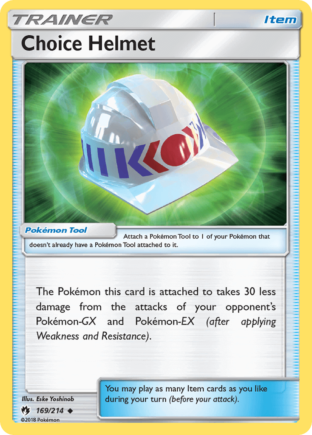 Choice Helmet (LOT 169)
Avoiding OHKOs on Shuckle GX is your main goal early on. Slap this bad boy on and perhaps you can make your Shuckle GX a  survive a long time.

Enhanced Hammer (DEX, PHF, PRC and GRI)
“Is that a Double Colorless Energy?” 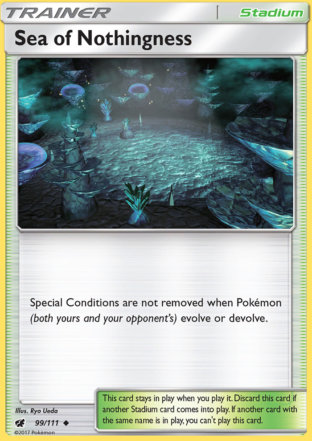 Sea of Nothingness (CIN 99)
With this stadium in play, even evolving does not remove the Triple Poison effect and that is not a situation I would like to be in. Very effective towards setup decks in general. 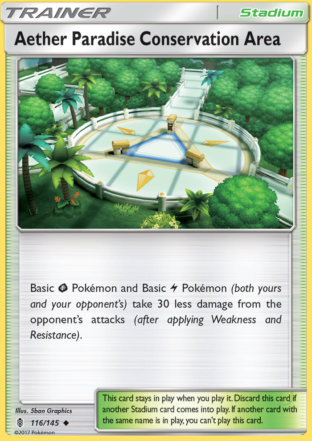 Energy Accelerators
If you come across these, its best to avoid using Shuckle GX as its a free 2 Prize cards for them.

Fire Pokémon
Meeting this bunch will most likely you’ll meet Kiawe as well. Hence crisping your Shuckle GX up with Weakness faster than you can say Triple Poison.

Ways to get your Active Pokémon to the Bench
Any form of “switch” is a reset towards Shuckle GX’s Triple Poison effect. 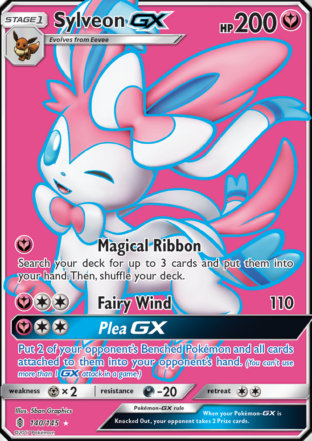 Sylveon GX Based Decks
“You have a nice deck!”

Anti-GX + Effect Pokémon
You can’t do anything to these Pokémon.

PS: Altaria GX’s Bright Tone only prevents damage from GX Pokémon but not effect so Triple Poison can still go through! That’s why Altaria GX is not in this section.

Anti-Ability Pokémon
Glaceon GX already needs 3 Energy to use its attack so technically its already a lose-lose situation. Alolan Muk (From SUM) counters you completely as Shuckle GX is a Basic Pokémon. Without your Ability, Shuckle GX is an easy 2 Prize for your opponent!

I personally think Shuckle GX is an underestimated card, given if used at the right match-ups, it can help secure your board position easier. Overall, its a fun and gimmicky card with some potential to be better competitively going forward. However, I don’t see a pure Shuckle GX deck making it through with all the Vikavolt and Malamar decks running around. Even Turbo-Zeraora GX and Blacephalon GX decks is looking like strong decks coming into the format, which in turns destroys Shuckle GX as well. 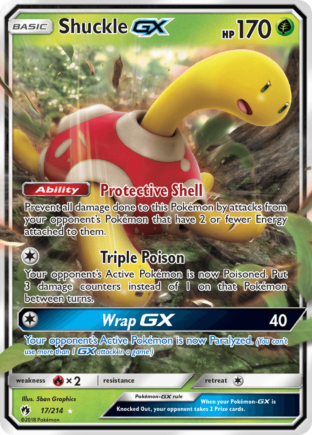 And that is all folks! Thank you for reading this edition of The Expert Belt! Keep your Protective Shell on and with that, Darren signing off!

*All graphics belong to their original owners and no copyright infringement is intended.